turkeys in the snow

every year, we process around forty turkeys for the thanksgiving market (including a few for our own table). these are the cage-free heritage-breed birds that we raise up from hatchlings starting in March. they are beautiful creatures, and get up to around 18 pounds. because they’re raised outside, and they’re heritage birds, and also because we sell them fresh, not frozen, they are juicy and delicious. we all really enjoy eating them.

saturday & sunday we got up early in cold grey weather to process turkeys. both days the energy was high and we got our day’s work done. saturday we got shut down early by freezing wind, which made it impossible to keep the scalder up to temperature. first time we’ve ever had that problem. so we knocked off before noon, and made up the difference the next day. both days we had good volunteer turn-out, though sunday’s was impacted by the snows. several of the people who didn’t want to drive down on icy roads in the morning, did so in the afternoon to pick up their bird, and the rest made arrangements with us to get their birds. i took wednesday off work, and spent most of it selling turkeys. and a lot of people did come down over the weekend, and the day’s energy was fun. I had great conversations with people all day, and heard other fun conversations going on all around me.

sunday while we were working, we got about a half-inch of snow. no rain. because it was snow, the air was very still, and it was actually pretty nice to work in, if muddier than we are used to. we did 18 birds on saturday and 24 birds on sunday, and now the barnyard is quiet for the winter. nobody left but the laying hens and the dog. on sunday we finished with turkeys around noon, including clean-up, since we had an abundance of volunteers to put to the final tasks.

a few photos from the day: 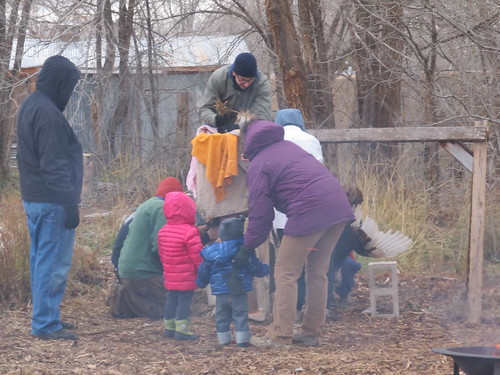 scalding (you can see our super-professional set up, here — it’s a water trough propped on saw horses over a camp stove, with a tinfoil windscreen. that stick i’m using to push the bird into the water? that stick is THE tool; we’ve used that same one for six years now. it’s got a fork that’s exactly the right angle and size to dunk a bird. 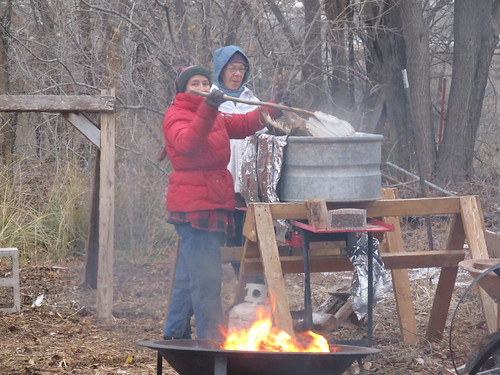 the scalded bird goes into the plucker, without its feet, which jam the plucker. 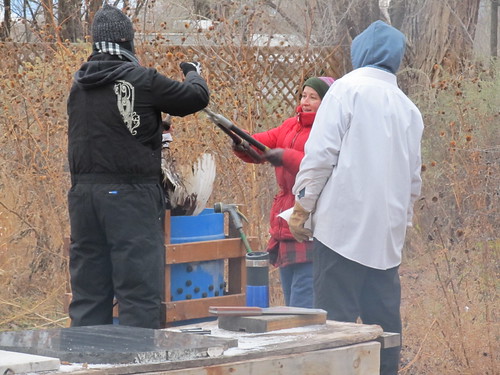 our whiz-bang poultry plucker in action (thanks to Chad Person for the photograph!) 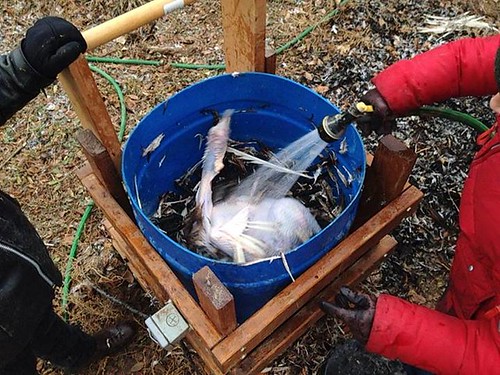 Thistle really enjoys a good turkey foot. she enjoys all of them, actually, though we usually save them up to dole out as treats over a month or more. 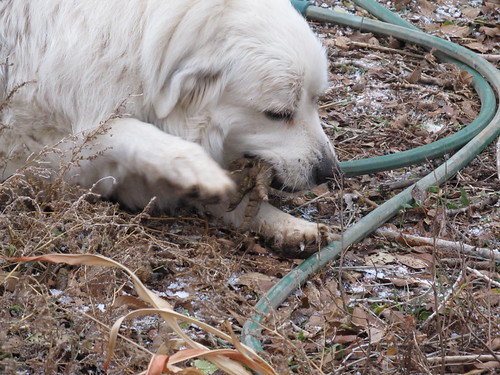 the enthusiastic butcher crew. this is Hannah, enjoying the morning’s work. 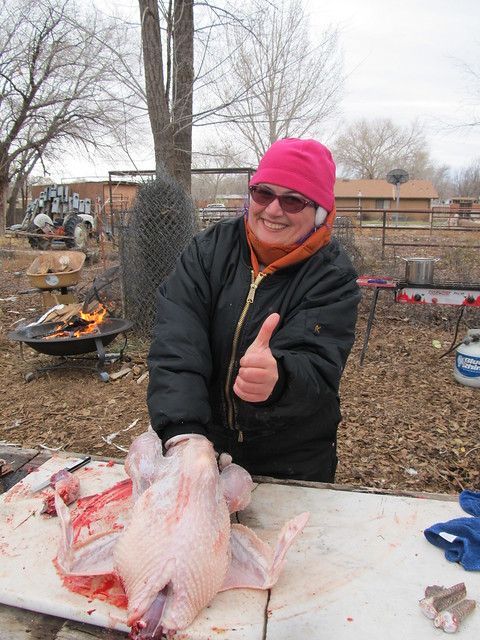 most people work the butcher table. 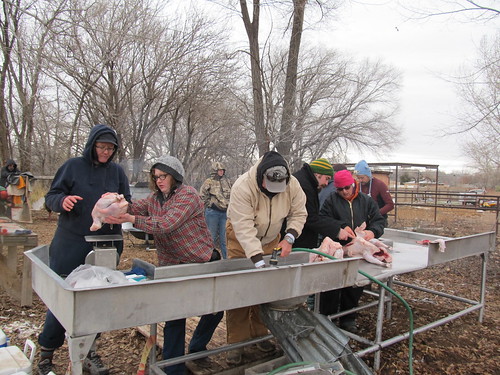 we didn’t need to use ice to keep the birds cool this year. the daytime temp never exceeded that of the interior of a refrigerator. 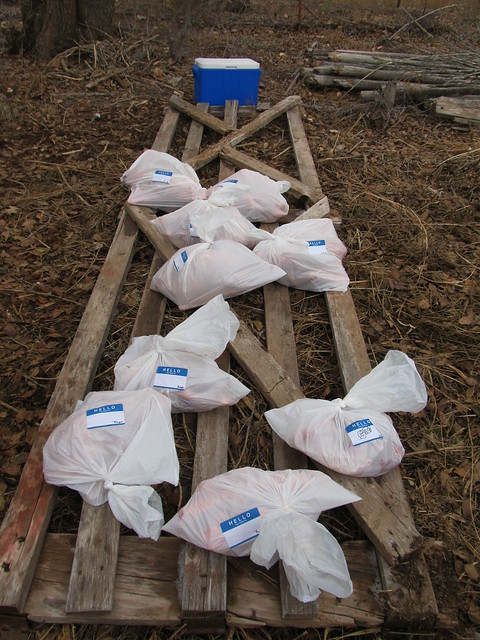 Alan and Dave wrap some hearts. 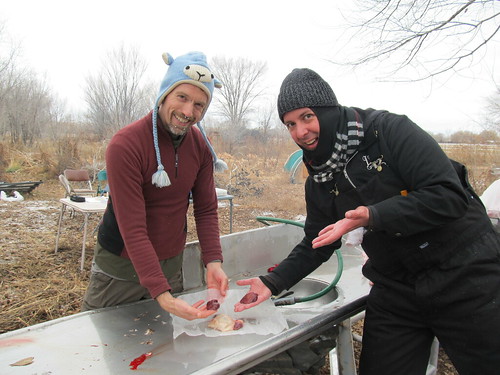 i promised i’d publish this. Dave, photobombing the butcher crew with a head. you’re welcome. 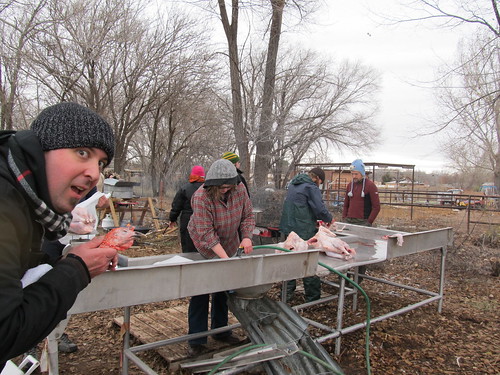 sunday’s snowfall (the blood from the butchering goes into the garden, to enrich our iron-poor soil). 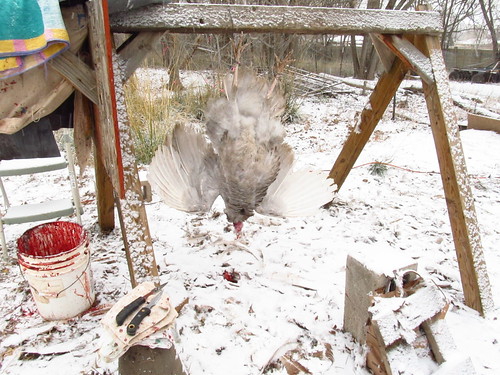 working in the snow 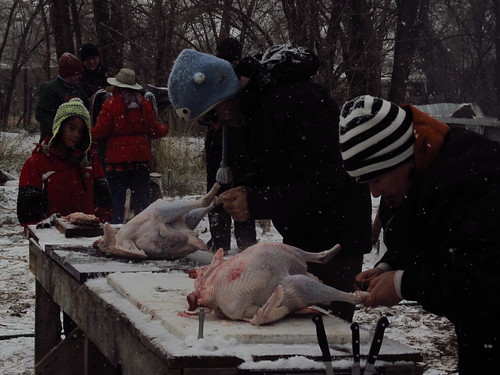 in the late morning, the sky cleared, and the work moved fast. Chery and I had a lovely conversation over our work. 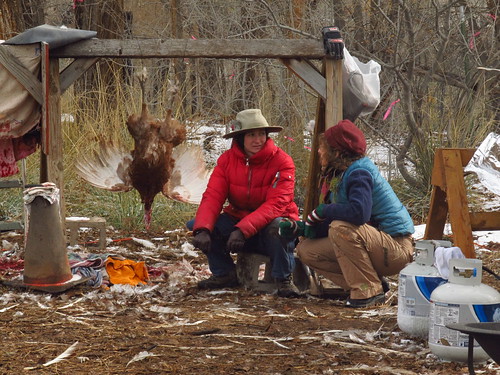 and here is the lovely little snowfall:

broomcorn in the field 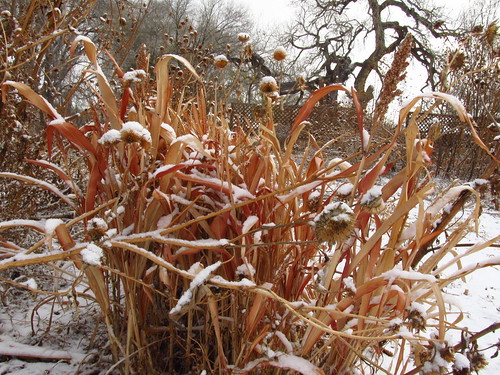 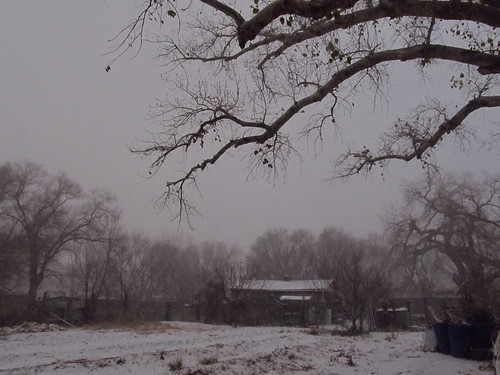 the north drive (look at that beautiful wall in the snow) 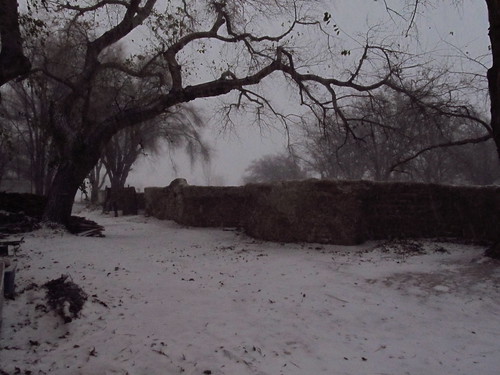 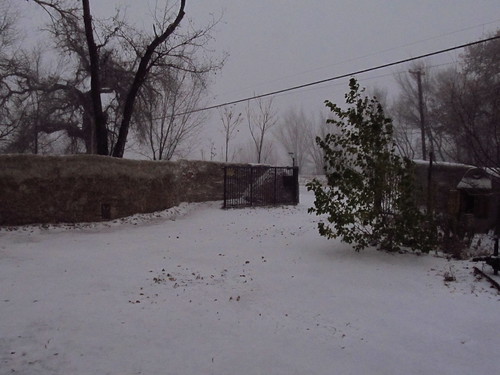 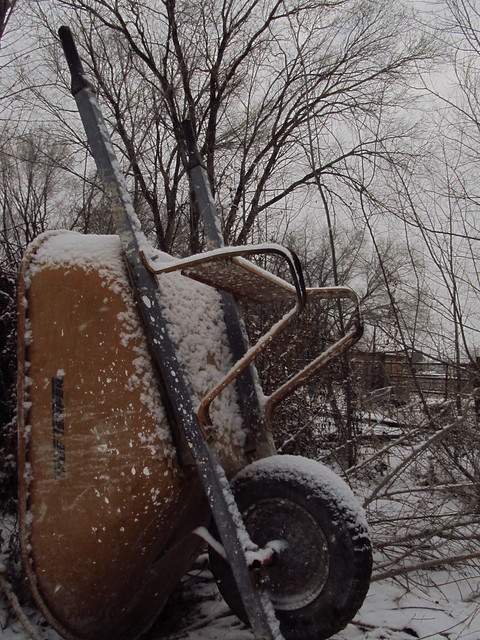 sunflowers, resting after their successful mission of total farm domination this summer 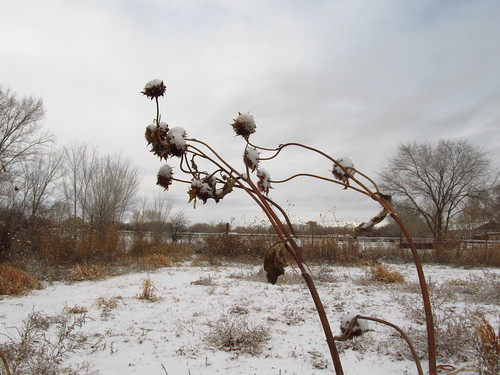 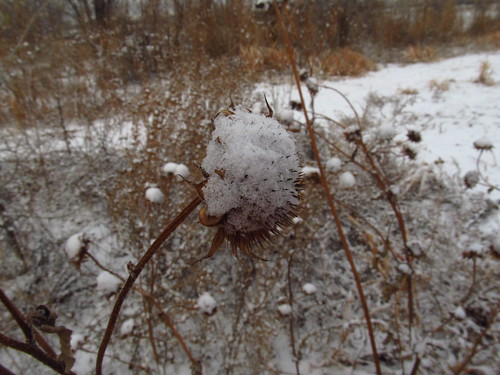 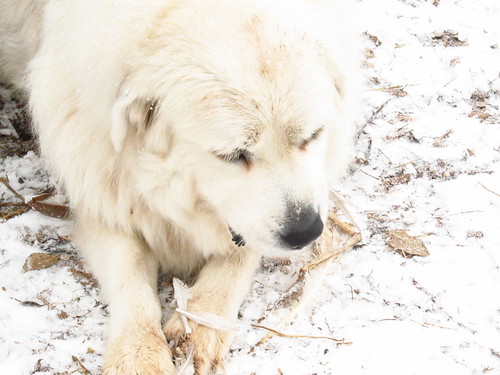 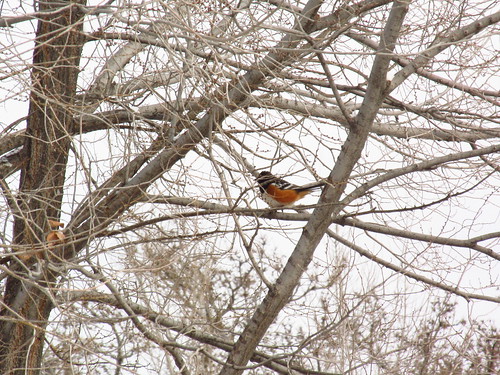 the rest of the photos are on our flickr page, here:

and we also received this wonderful approbation from Tristan’s mother Britta, after the holiday:

“I will now take this opportunity to tell you how impressed I am that you and your volunteers spent those cold, snowy and windy days slaughtering turkeys so the feast of thanksgiving could be held. The next time one of my geezer friends moans and groans about how irresponsible and lazy young people are today I will whip out my tale of the turkey slaughter held outdoors during a winter storm. I thank you for adding to my store of stories.

“As a final note, I want to share with you what happened on the way home. Someone made a joke about eating in a sardine can. I piped up that next year we should be about to gather in the great room at Mahazda where there will be room to seat 40. Deb observed that when that happens you will invite 50. That perfectly encapsulates the spirit of Sunflower River Farm and the stewards who have created that haven in the South Valley.”

absolutely. we’ve never been accused of an insufficiency of ambition, not even when it comes to hosting a good party.

on that cheerful note: we paid off the mortgage on Sunflower River last month! and closed on the construction loan for Mahazda this week. rolling right on through. we can start construction on the remodel in the next couple weeks!