As most of you know, we bought the house next door earlier this year. We’ve been talking our way through the project, waiting to start on the work until we had finished wall-building season for the year, because there are really only so many work days in a year, and we had to focus. That has paid off; the wall is in much better shape, and we all feel good about tackling Mahazda now.

“Mahazda” is Lojban for Hill House. Lojban is one of Alan’s interests, and the house formerly belonged to Mr Hill, so it was a good place to pull a name from. Now we have houses in three languages; the primary dwelling on the farm is the sunflower Cottage, Tristan’s other place is Caer Aisling (which is Gaelic), and now Mahazda. (our cars are multilingual, too: Simon, Orlando, Lily, and Dietrich. we name things, around here.)

Mahazda is as much project as it is house. it is not presently fit for human occupation. we are going to gut it and start over, working from the existing footprint to create an interior that delights and satisfies us all, and serves many uses. it’s a large space; the livingroom and kitchen are both generously proportioned, and as things currently stand, there are two mid-size and one small bedrooms (we might make the small room into an office, possibly), a garage, a decent-size bathroom, and a back room of more or less laundry-room size. the final designation of any of these spaces is still an open conversation; we are going to gut the house, and then re-imagine it from its empty echo, place of all potential.

so we started on the demolition! a few weeks ago, we went in and ripped out the super-toxic scary carpets, and removed the doors to get them out of the way. then last weekend, we tackled demolition in earnest. ceilings and wall plaster, here we come!

standing in the kitchen, looking through the hall into the livingroom: 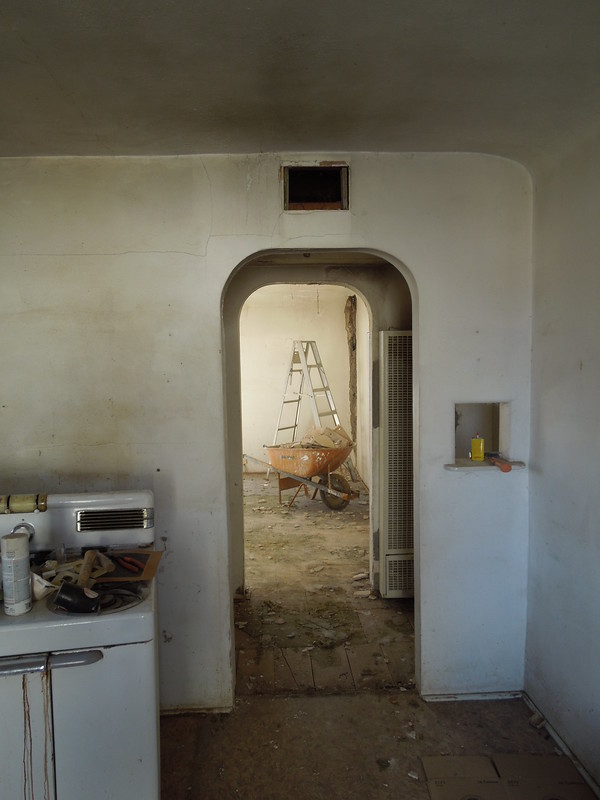 livingroom detail, mid-demo. that fake arch is totally coming out. it creates the appearance of divided space, which is the opposite of what we want. 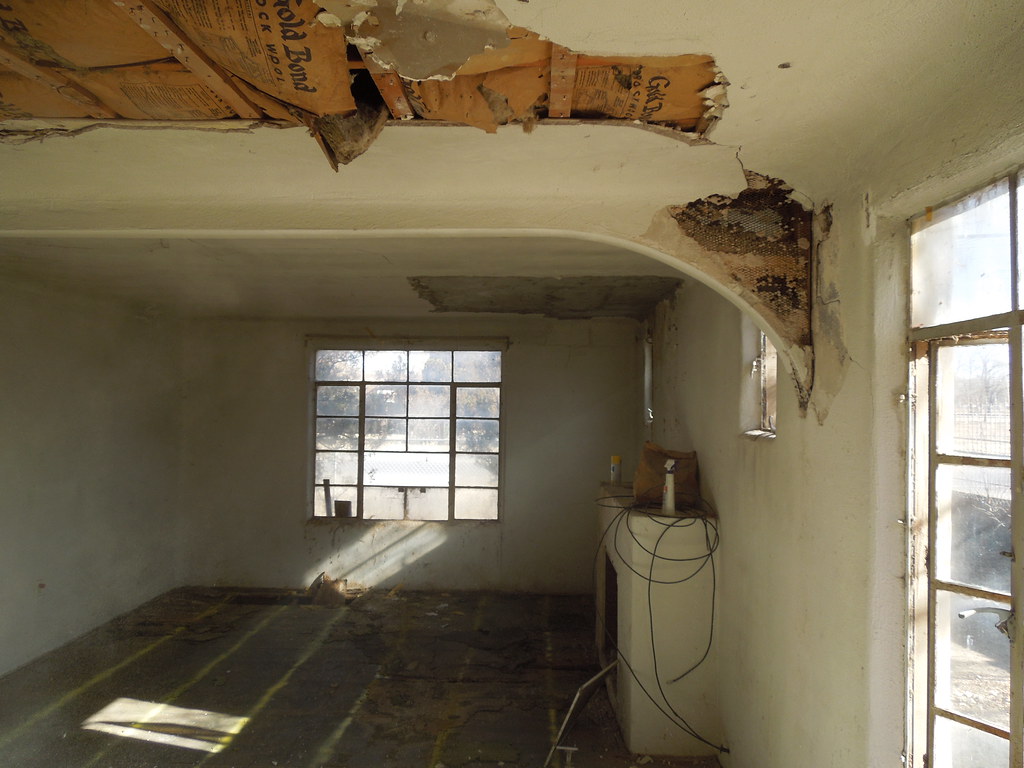 the day’s big discovery: the exterior walls of the two main bedrooms and the bathroom are adobe. 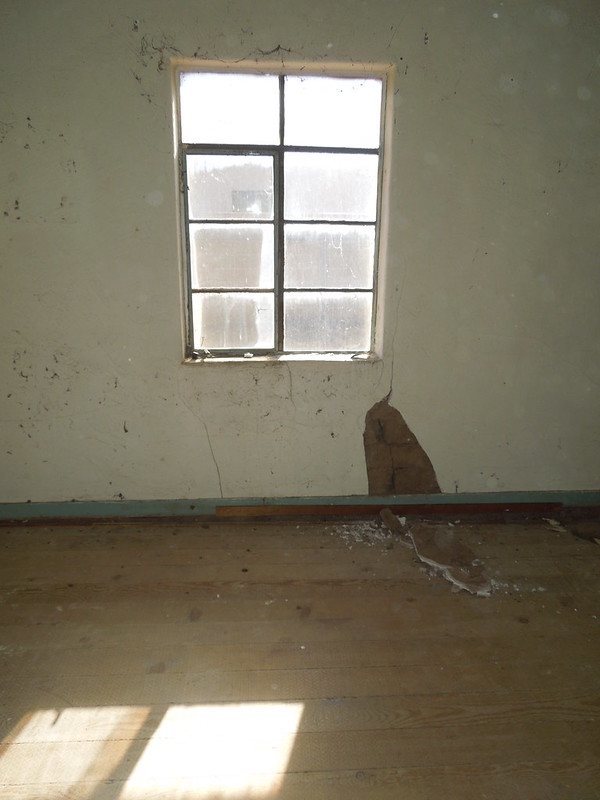 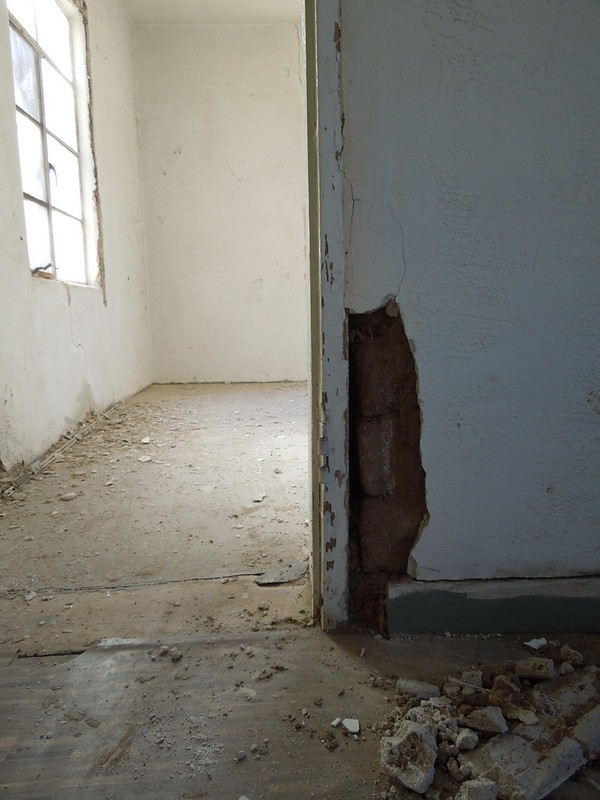 we found out that the house was originally one largish adobe room, with no interior divisions. we found where the windows used to be, on what are now interior east walls in both rooms. plumbing and electricity were pretty clearly added at a later date. this accounts for why those two rooms only have one outlet each, and that outlet is located in the center of the east wall — where the window used to be.

the wall between the south bedroom and the bathroom is made of layers of boards sandwiched together with plaster. 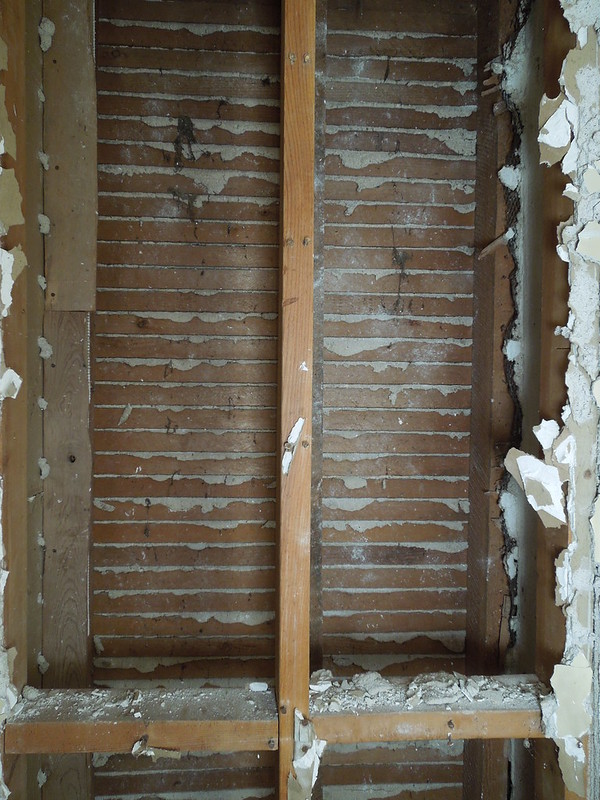 Jenny and Kat, midway through the livingroom ceiling. we also discovered that the electrical wiring is one giant old-school fire-hazard, and somebody was very lucky this place never burnt down. 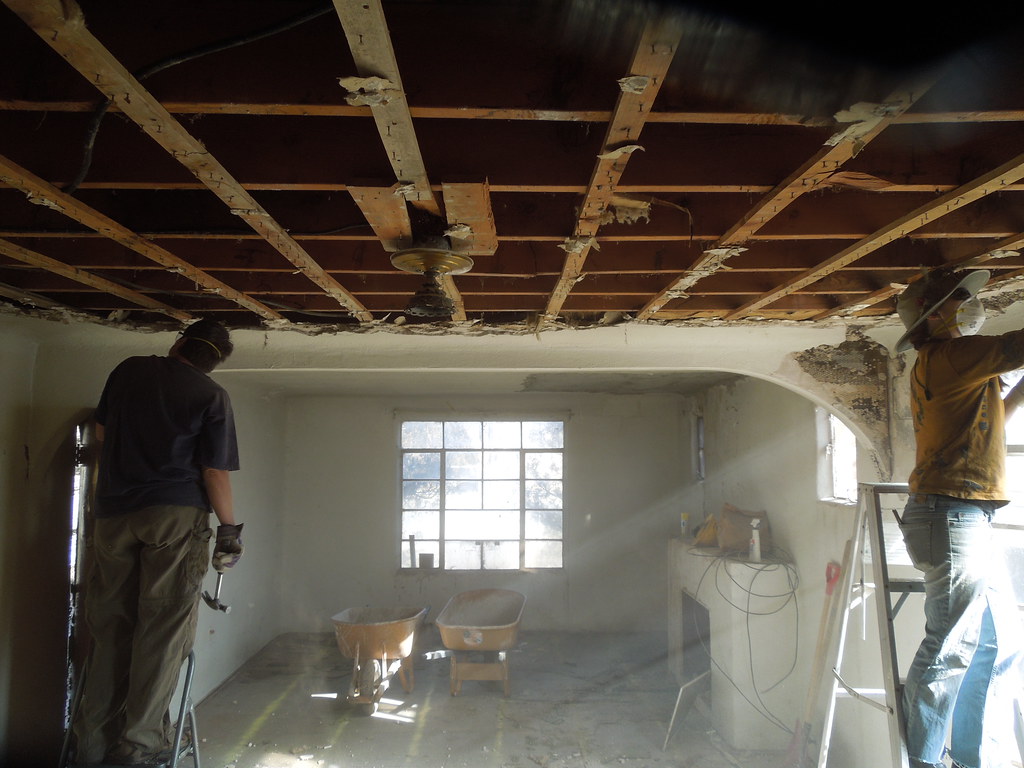 same moment, view from the other side of the room: 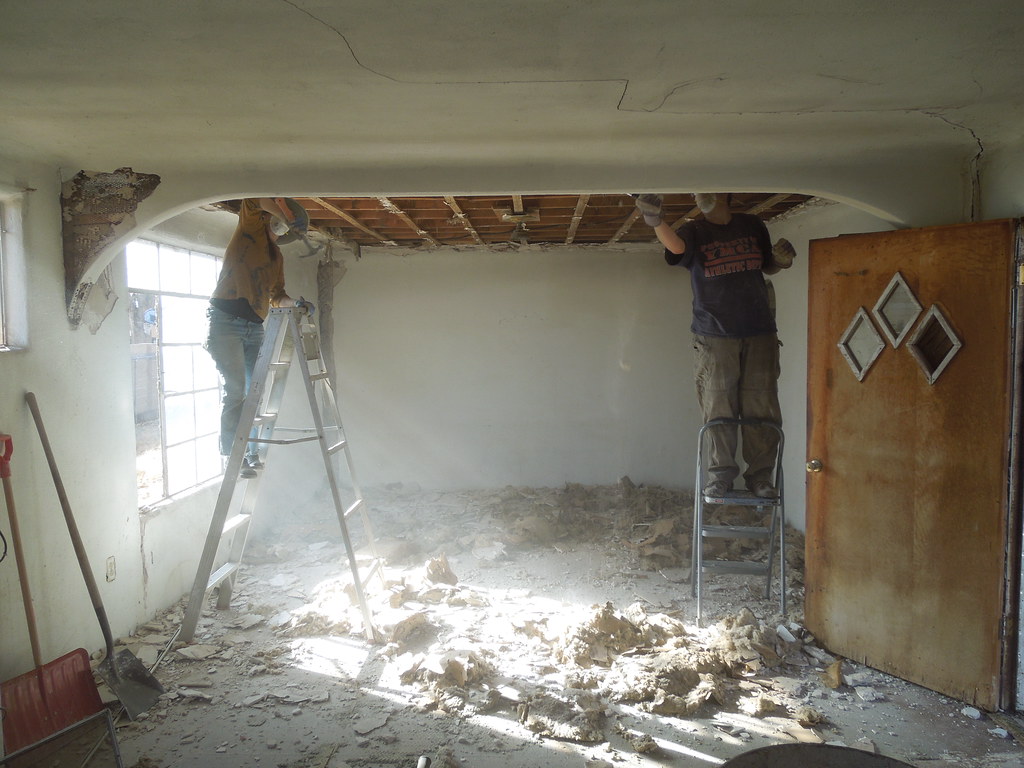 meanwhile Tristan single-handedly tackled the back bedroom ceiling, and some of the wall plaster. 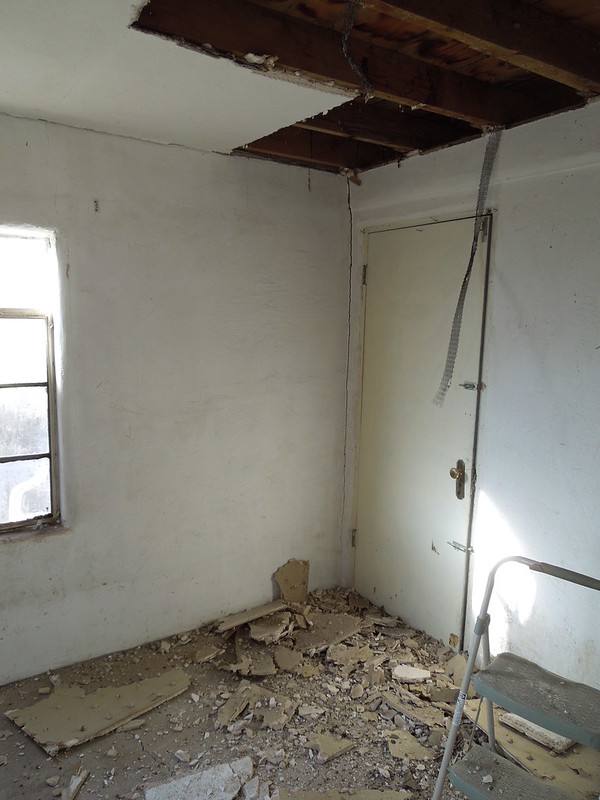 Alan, looking a little like a horror movie character, in the light from the south bedroom window. 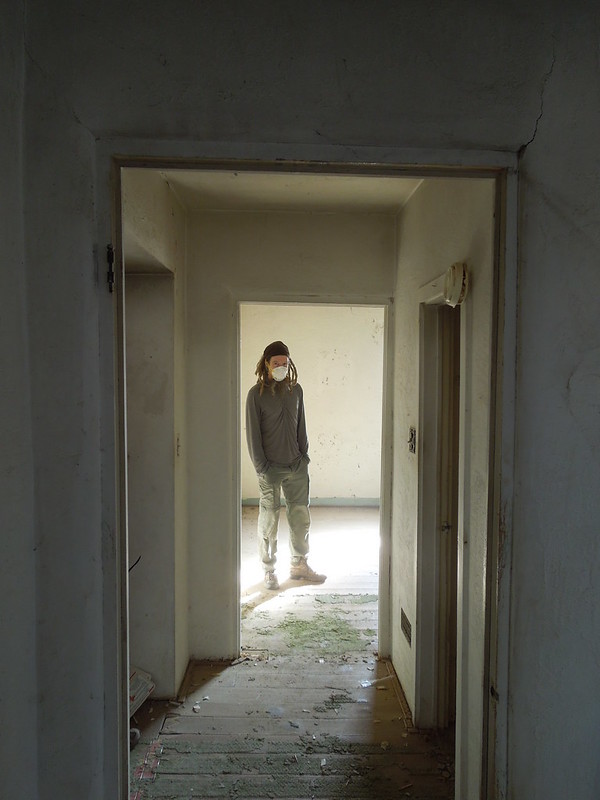 discovering that the back of the house is adobe also helped clarify why this is happening in the south bedroom: 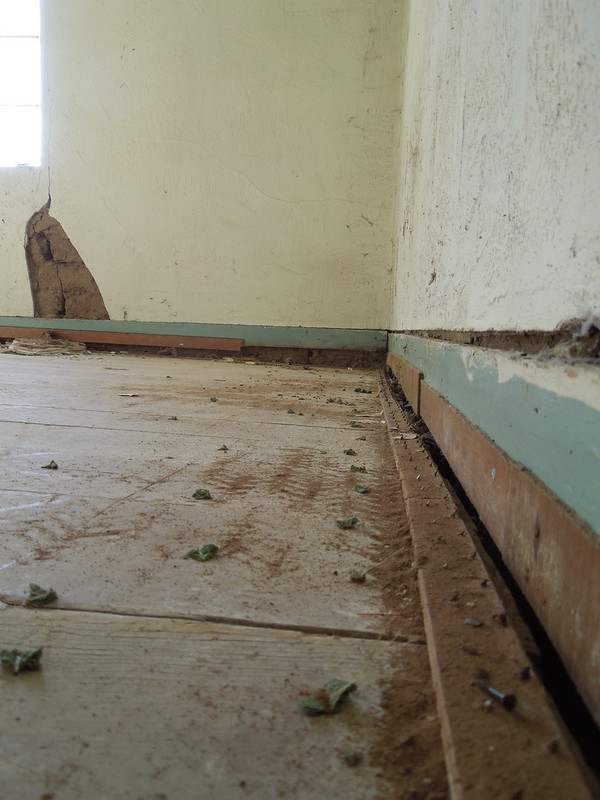 floor joists in old adobe houses are rarely actually attached to the walls of the foundation, but instead rest on pilings of some kind (a friend of ours just found out that some of her floor joists had been resting on old coffee cans. really increases your faith in the floor, doesn’t it?) that appears to be the case in this instance, too. well, we don’t know about the coffee can yet. though i wouldn’t be shocked. i’ll let you know what we discover when we rip the floors out!

coffee-can floor patch in the hallway (for instance) 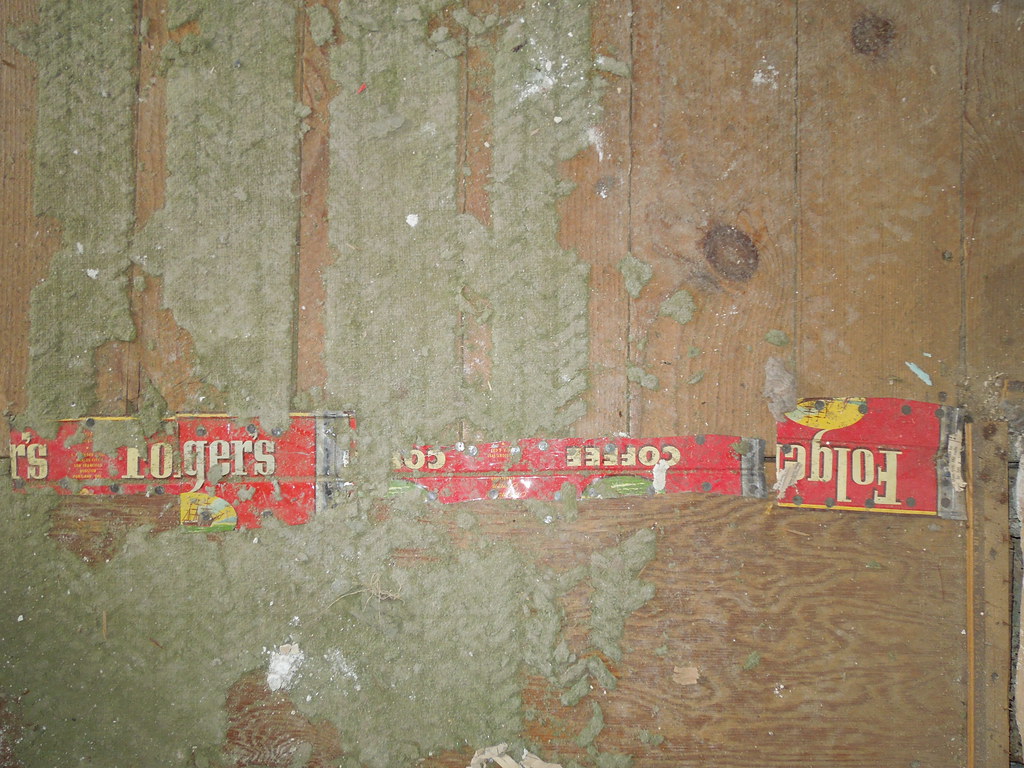 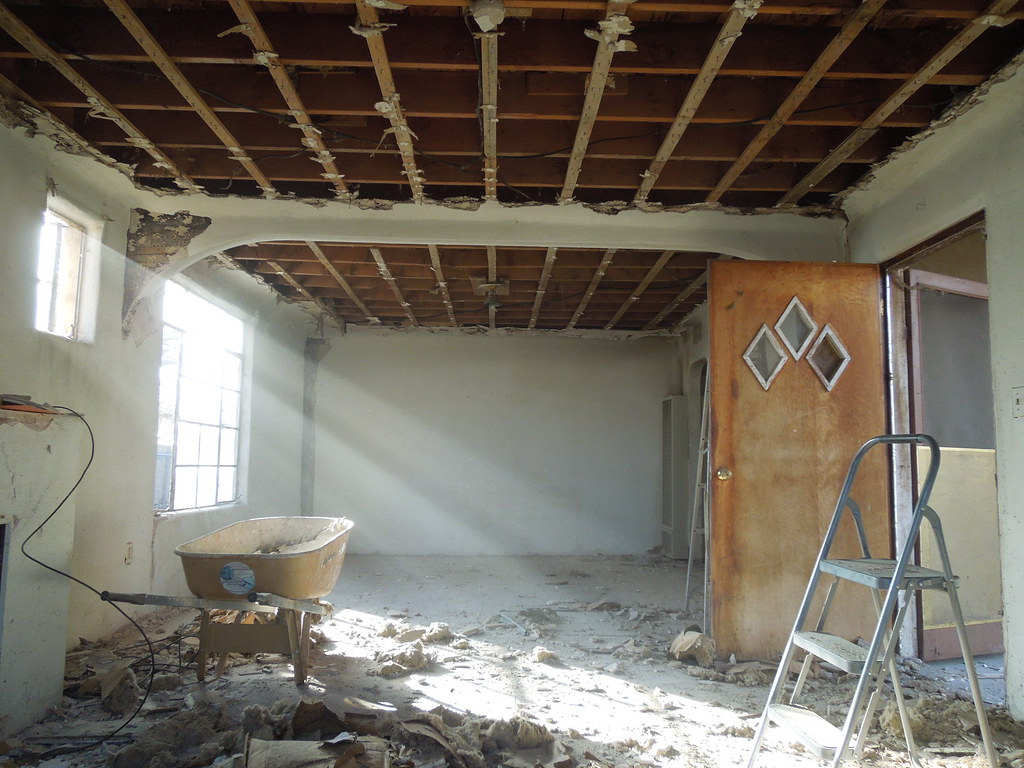 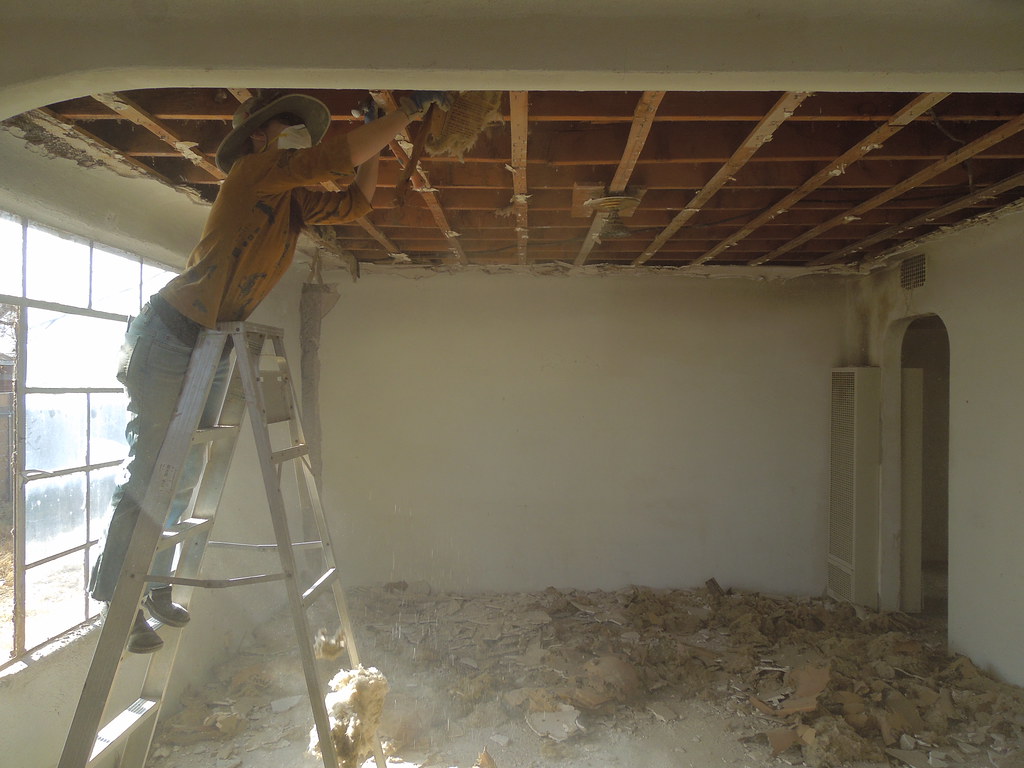 the ceiling in the north bedroom, which is part of the original adobe house, showed substantial evidence of remodelling. it is unlike any other ceiling construction in the house. 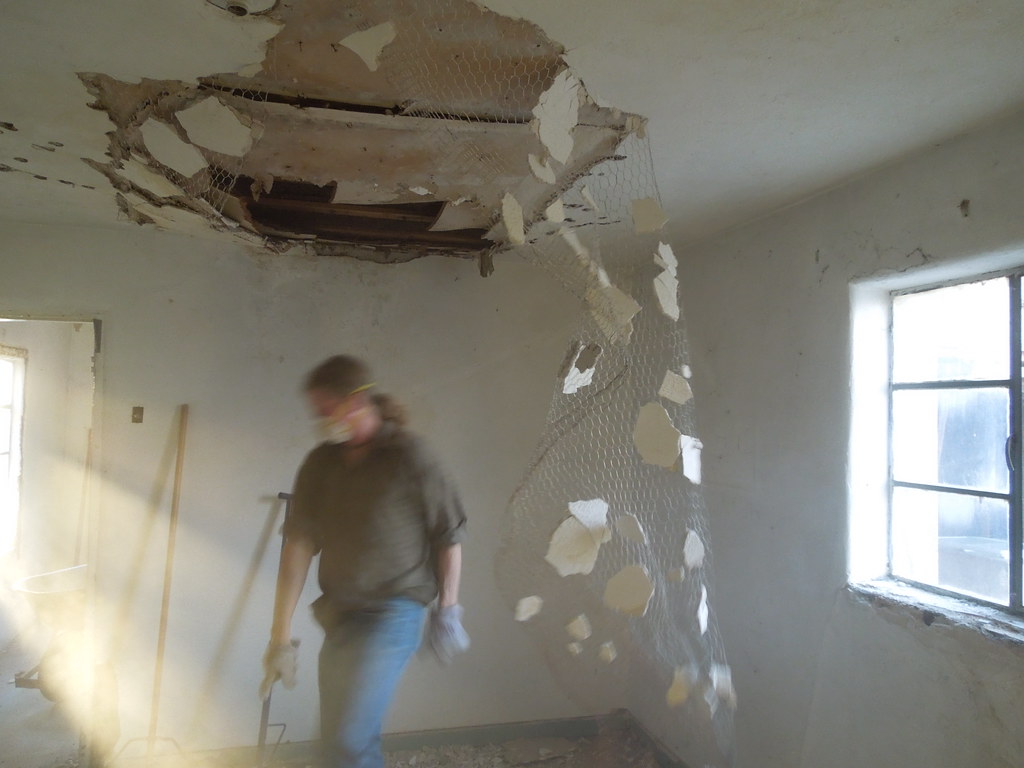 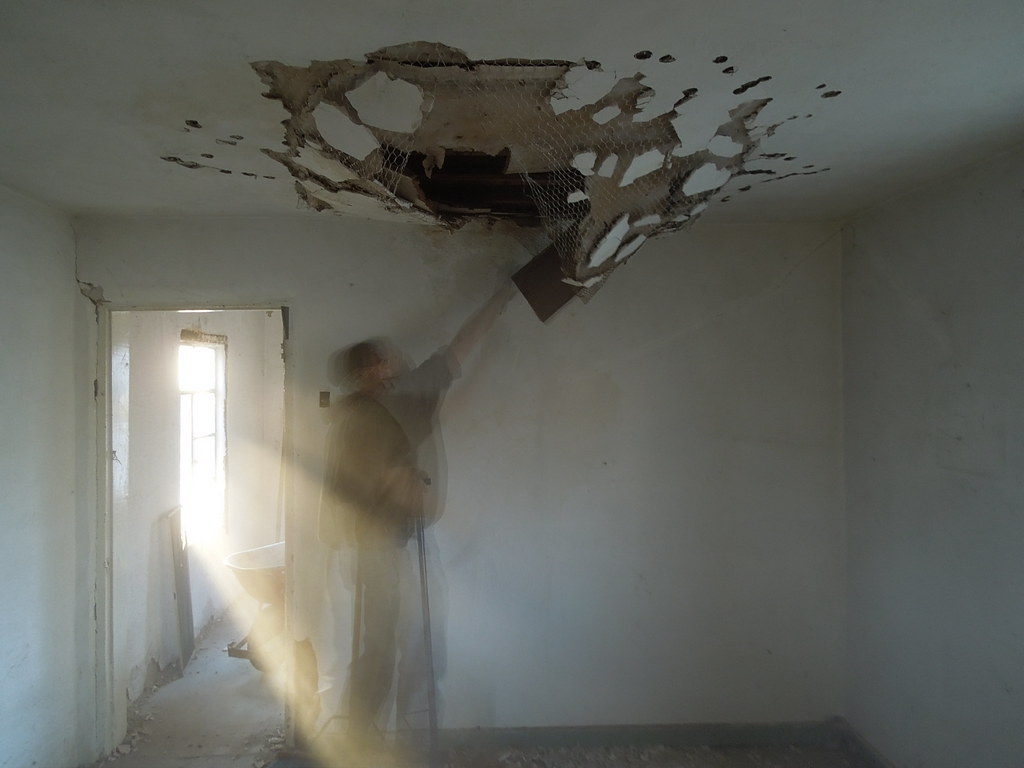 Alan and Kat swing on the chicken wire to pull the ceiling down on our own heads. this was actually pretty fun. 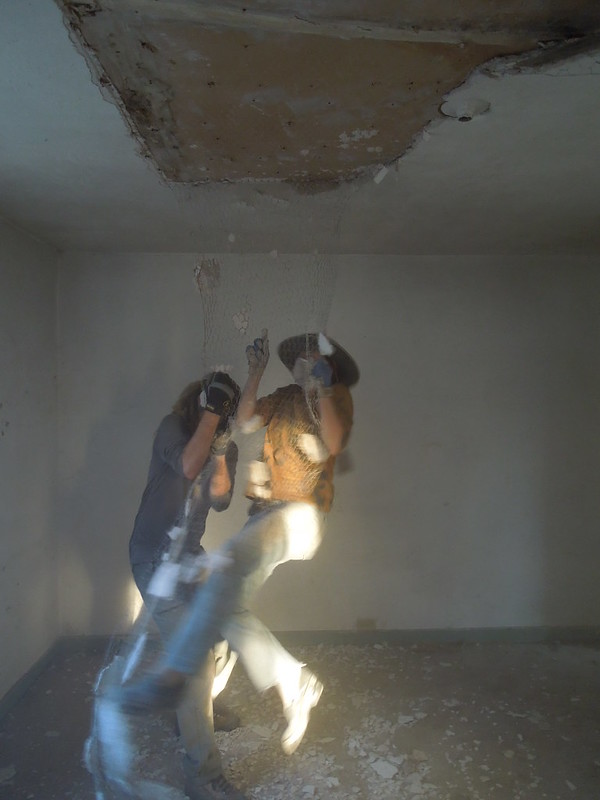 Alan and Kat in motion, cleaning up. 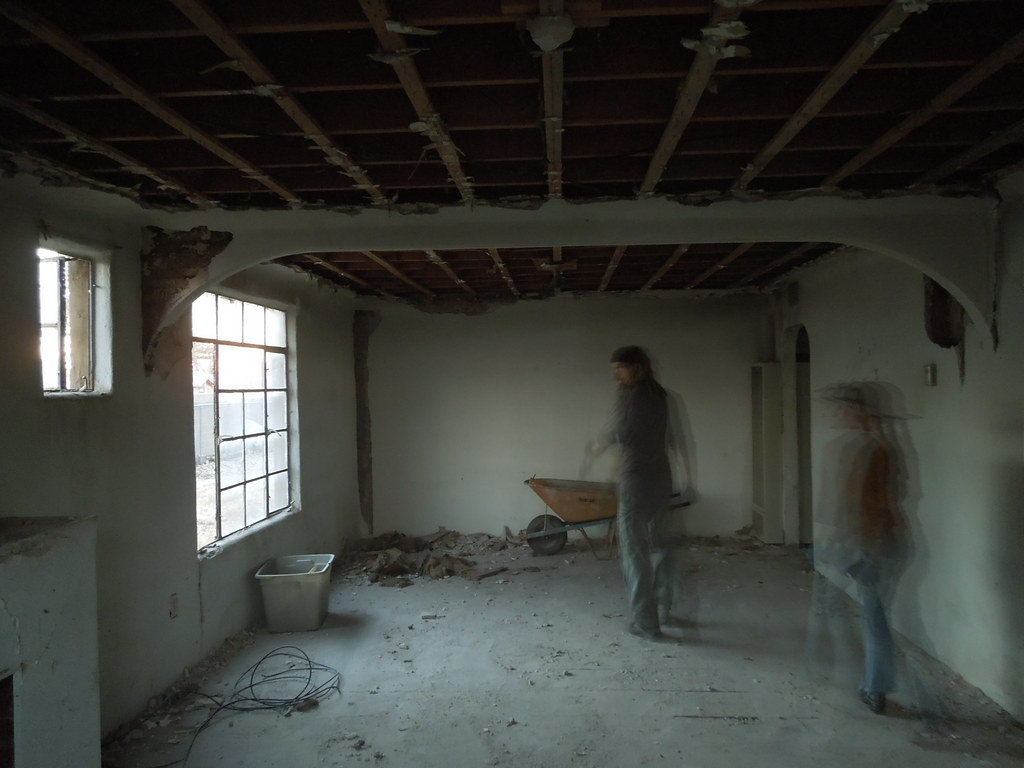 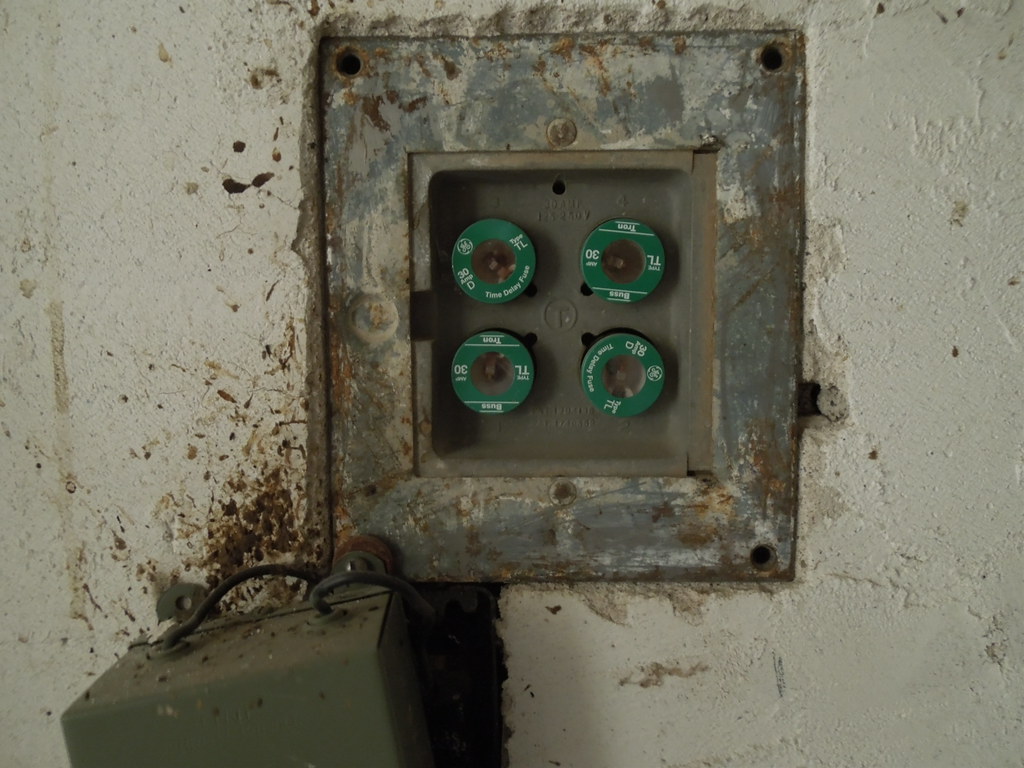 the view in the livingroom window 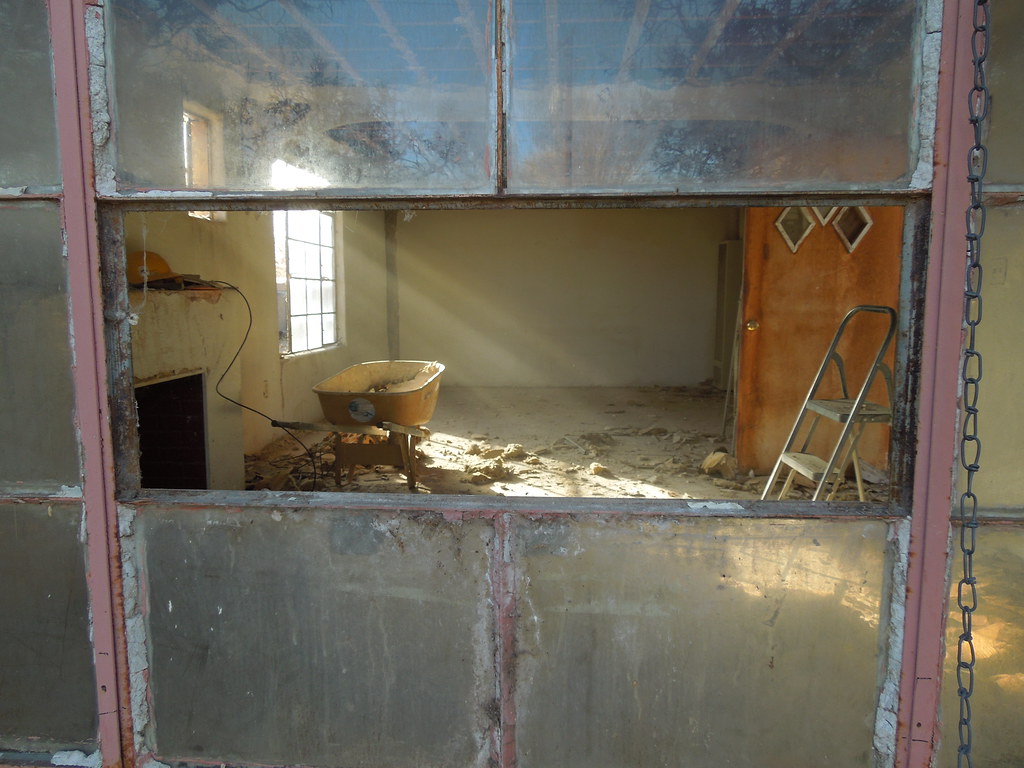 the invasion of the wheelbarrows: 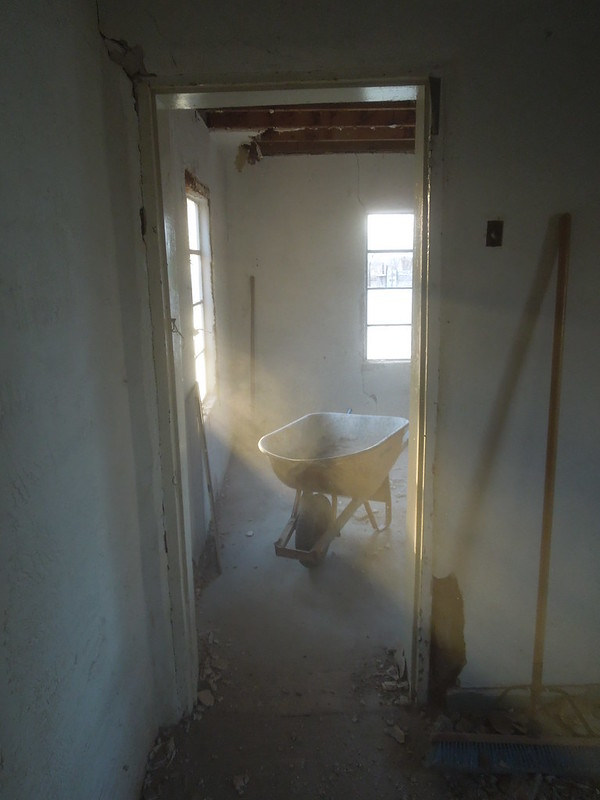 Quote of the Day:
“i’ll just get that other wheelbarrow out of the bathroom.”

the escalating evidence of process: 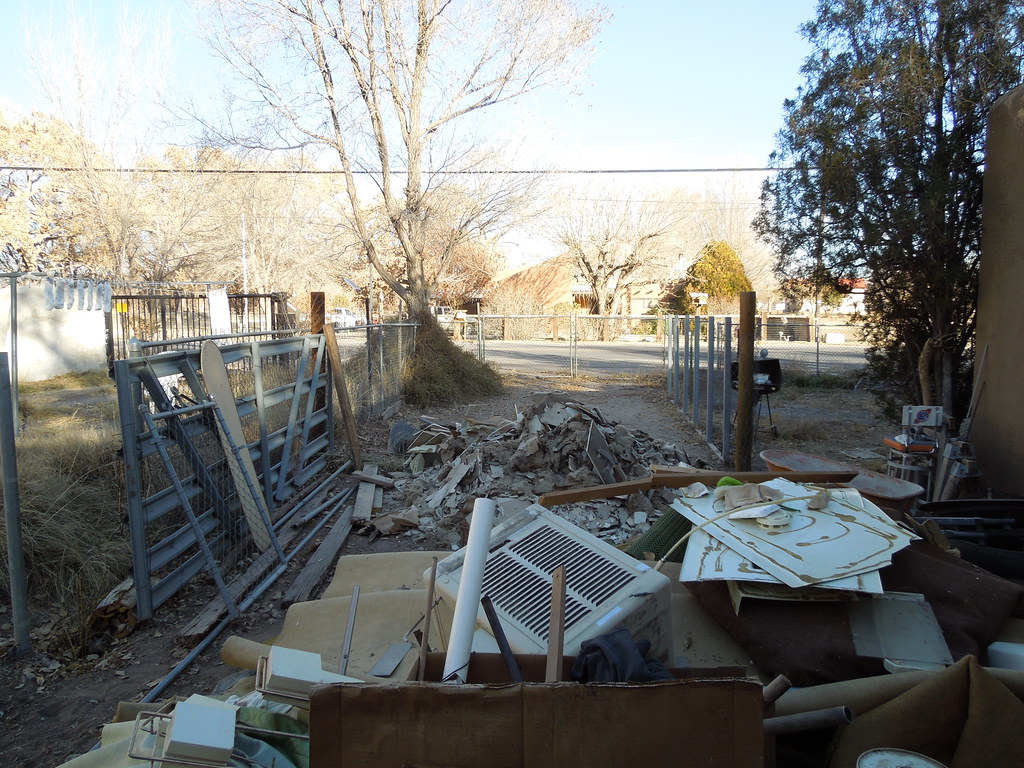 we’ll get a dumpster by the January work party, and evict all this trash at once.

the full photo set is here.