This is maybe a bit non-linear, and i apologize if that impacts its readability. I’ll do my best.

Each year, Sunflower River takes a long weekend retreat to connect with each other, evaluate our current situation and our long-term goals, and plan our next year. For a variety of reasons, last year’s retreat was really rough for everybody, and we all went into this year’s with a certain amount of trepidation. But we also all showed up with the will to hear each other, ensure that we were all heard, and to repair the rifts. Every one of us stepped up and did their best, and it really showed. By the first night, we were all a lot calmer and clearer, and by the last day, we had accomplished a very great deal, on personal, organizational, and planning levels. It was magical, in the particular way that committment, integrity, love and intensity of purpose combined can be.

This is what our Retreats look like, pretty much for four days. 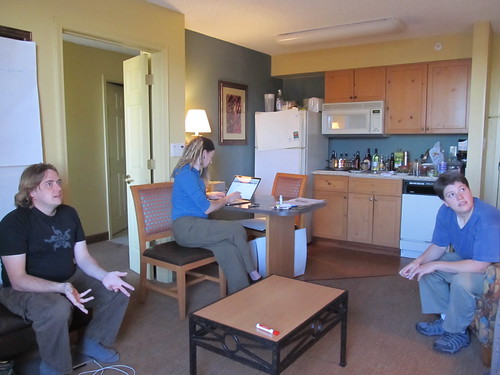 Rev is on track to become a Sunflower River Steward. So we re-visited this conversation:

What Makes a Steward?
–decision-making authority supported by the group
–personal projects & visions supported by the group, & as they impact SR, funded & assisted
–our responsibility to take care of the place and each other; we take ownership of the responsibility (as well as of the land and our actions)
–we cannot pass the buck.
–willingness to step up to all this
–focus on action & creation
–philosophical alignment/ acceptance by the group
–intensity of purpose
–1+ year on the land before attending a Retreat
–attending/participating in a Retreat
–accept increased responsibility and do well with it; make decisions that are aligned with the group
–committment (ongoing: we are not walking away from this)
–we don’t account for each other’s time
–we pay what we can, and put in as much time as we can 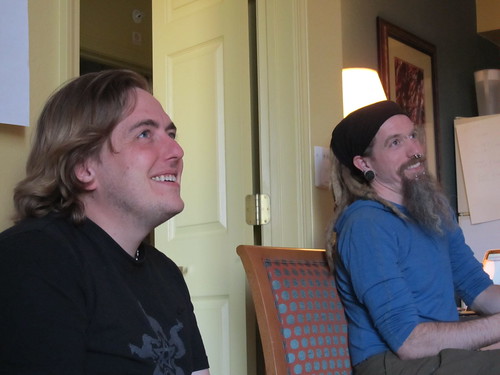 In sorting out what exactly it is that we are doing and why we are doing it, we developed the following pyramid, derived loosely from Maslow’s hierarchy of needs.

Why are we here?
-belonging
-group-decision making and problem solving
-retirement security
-participation in a coherent culture that is not a monoculture
-spiritual connection
-resource sharing
-inter-sufficiency
-home base
-something larger than oneself
-opportunity to be stretched & challenged
-surviving/thriving in a changing world
-moral & tangible support for manifesting personal goals 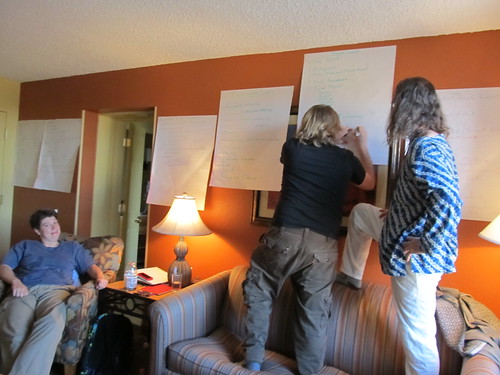 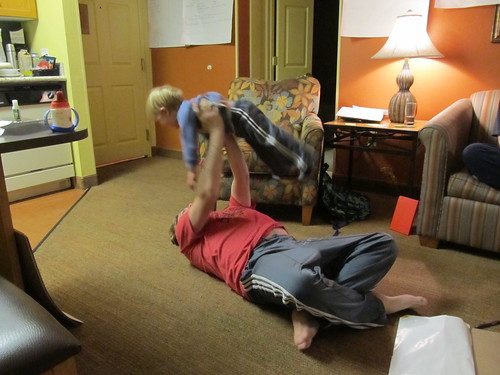 Social Contract: we have to feel safe enough to say things are broken, without it being blame-oriented, so that we can talk it out and fix it, without brokenness-reporting being a primary goal, but a tool we actually have access to — “no fault fail”

Project Control
System
1. Temperature Check
2. Background/Context (R&D)
3. Initial Proposal/ Problem Statement
4. Needs Assessment (and modifications as needed to accomodate needs; lather/rinse/repeat)
5. Formal Proposal
6. Stewards all sign off. Project cannot substantively change without bumping back to needs/proposal stage.
7. Do the work. Update everybody as it goes. Hydras are possible here, and they send the project back to Needs/Proposal.
8. Evaluation/Retrospective

formal proposal includes: budget, design, roles, resources, timeline, evalution of risk, operational impact.
sign off must be all Stewards together in person. sign-off expires (needs-re-upping) in six months. sign-off can’t be retracted (no “just not feeling it today” style regrets after that point).

we then spent an entire day sorting out the new floorplan for the now-mostly-gutted Mahazda house (MZ). it’s fantastic. we are collectively so much more brilliant than any of us could be individually. we’re going to make the oldest part of the house, the central big adobe room, into the common room. this is also the largest open space in the house, and making it the community space honors the spirit of the dwelling.

details: if we can put a clerestory roof & windows over the kitchen, we will; we’ll price that out. we want to do a strawbale wrap for insulation. heat is an open question — as passive as possible, but then what? wood floors. light colors, like white oak or similar. sun tunnels in the roof of the kitchen and common room. bay windows in the breakfast nook, office, Jenny’s room, and common room. we can start seeds in them. enlarge the common room window. french doors into the kitchen (where the garage door presently is). all doors in the hallway open away from the hall.

Usages: Jenny & Gawain move into MZ; G gets his own room. Tristan moves into Jenny’s current room. Cottage livingroom becomes the Library; cottage south bedroom becomes the Craft Room. MZ also holds an office, a large common room, a generous kitchen (at last!), with a breakfast nook, a utility/mud room area at the back door, and two bathrooms, at the front & back of the house. (i’ll try to post an image of the new floor plan. we moved EVERYTHING. the garage is the kitchen, the “back bedroom” is the breakfast nook, the whole adobe center remains open for common space, the kitchen is G’s room, the livingroom divides into office and J’s room. Bryan wins and we do put a bathroom where the pantry was [he initially said we would], and the back bathroom is at the far back of what is presently the garage but will be the kitchen.)

House Meeting has been variously broken for a while now. we identified three needs it fulfills: planning, emotional support, and social time together. we blew it once through overplanning (we drowned in our agenda) and once by failing to be capable of providing emotional support for each other. we are addressing that. new house meeting strategy: dedicated planning meeting the first week of every month. other meetings will be social, and we’ll do something together (even if that is to just chill, or do any kind of activity one can do on a wednesday evening), and who is in charge of organizing the activity (or picking up the beer, you know) will rotate, alphabetically, amongst us all. this should take a lot of pressure off, stretch us in interesting ways socially, and provide some real fun. as well as providing a dedicated planning space. we’ll re-evalute this system in 3 months to see if it’s working, or if we need to tweak it, or if we need to pitch it and try something else new.

sooner or later, we need to make the Cottage be 200 amp instead of 100. unfortunately, this will require re-wiring some or all of the cottage, and the pump house. the barn is probably okay given that we are going to build a workshop, so the tools will move. eventually. things that will probably stay on conventional grid for a while: cottage, MZ, barn, hottub, workshop. Things that could go solar incrementally, much sooner: potting shed, greenhouse, AP system, yurts, barnyard (coop lights), hexayurts (proposed wwoofer housing we plan to build in the green belt this summer), abbatoir area. we’d like to create a series of small independent systems with interchangeable parts, so that it will scale up, and integrate.

Here’s Gawain cleaning up after us: 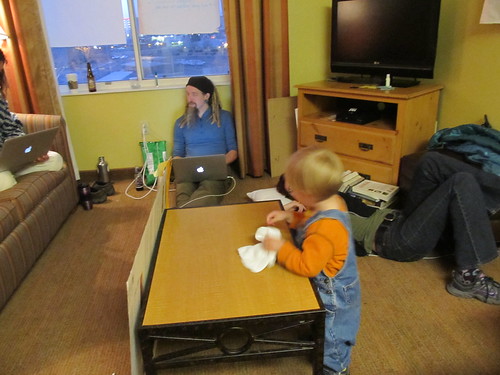 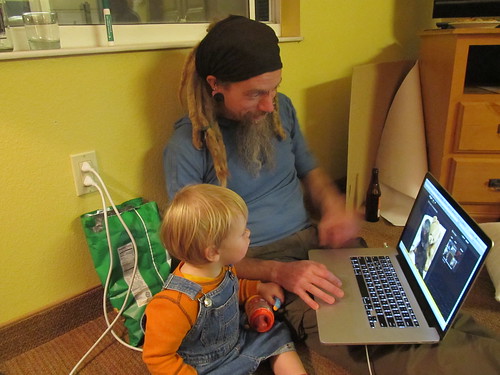 and it’s awfully nice to come home to this: 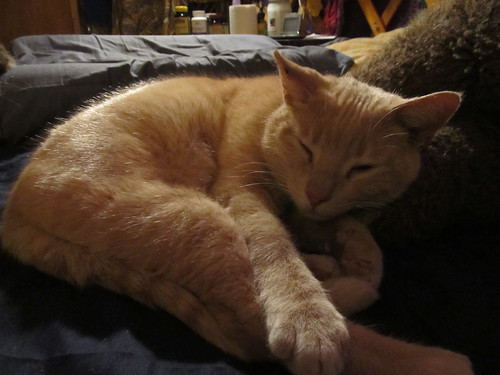