Last year, we decided to construct two hexayurts for intern housing on our back acreage. Prior to this, all our summer interns have camped in the area we call the green belt, about halfway back on the property. Many of them enjoy the long campout, but it leaves them exposed to weather events such as spring windstorms and monsoons, and over time, the impact of having tents resting on various parts of the land has been somewhat detrimental to new growth in those areas. Hexayurts allow for quick, portable, weatherproof housing. They’re inexpensive, and considered a sustainable portable housing method, which emerged out of Burning Man culture and have been recently widely adopted. This project has also allowed some of our longer-term summer interns to learn the skills involved in building hexayurts.

on the first build day, Alan, Rev and Randy took the project from raw material to 6 “kites,” which compromise the roof. 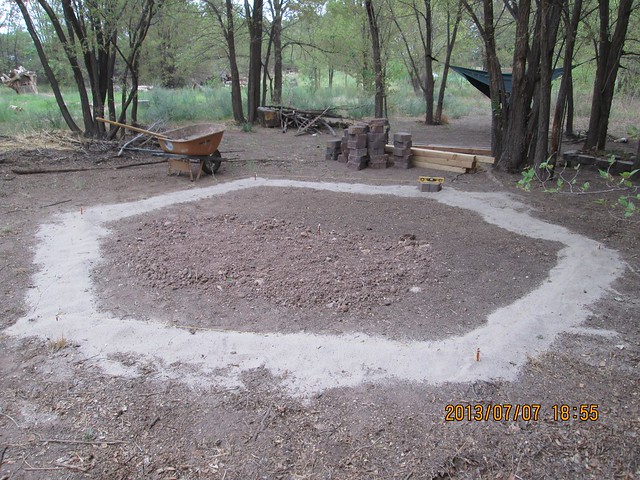 Parallel to converting rigid insulation and tape in to ‎hexayurt panels is site-prep. A ring of cottage stone will keep the yurt wall off the ground, while also elevating the structure enough to prevent irrigation water from getting in. The sand allows the cottage stone to be leveled (we’re ‘nominally’ leveling the stone, rather than having it it level across the span.) Cottage stone was chosen because it is easy to work with and extraordinarily easy to recycle. Off to the right you can see a garden our intern Justin created last year out of cottage stone leftover from building the pond. 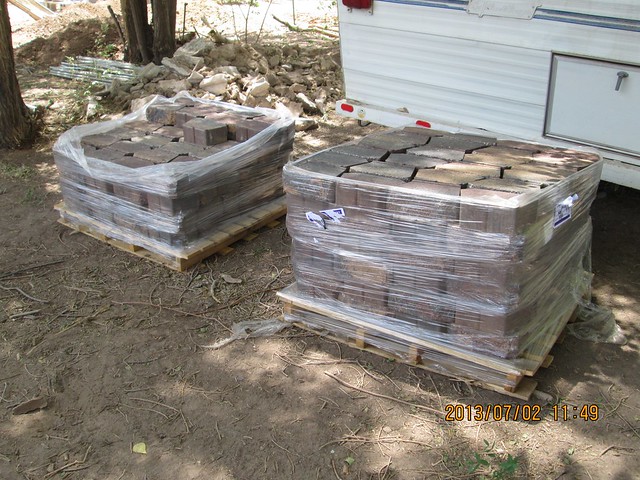 The tent in the background of the first photo has become an exceedingly popular way to WWOOF. Alan sleeps in exactly the same product in his yurt, and made sure his own deck had uprights that could be usee to support a hammock. The 4×4’s you see here are for the same purpose: we’ll put them in the ground inside the footprint of the hexayurt so a guest can sleep in a hammock.

Alan asked Randy Ziegler to Sunflower River this year specifically to work on this project. The ‘Egyptian’ style survey markers are, to my knowledge, best practice for sites of this scale. This is entirely his work. 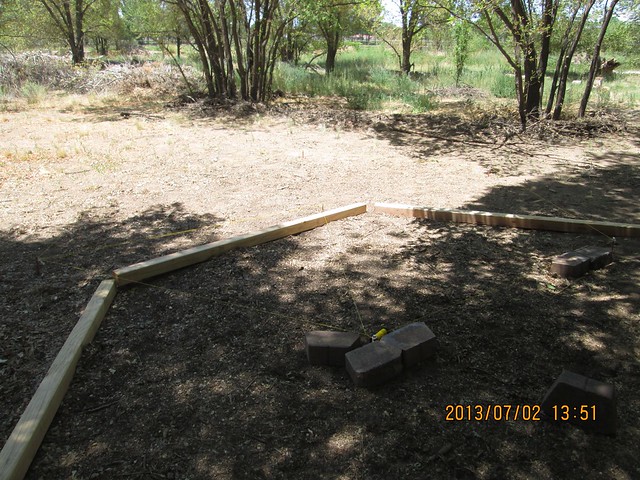 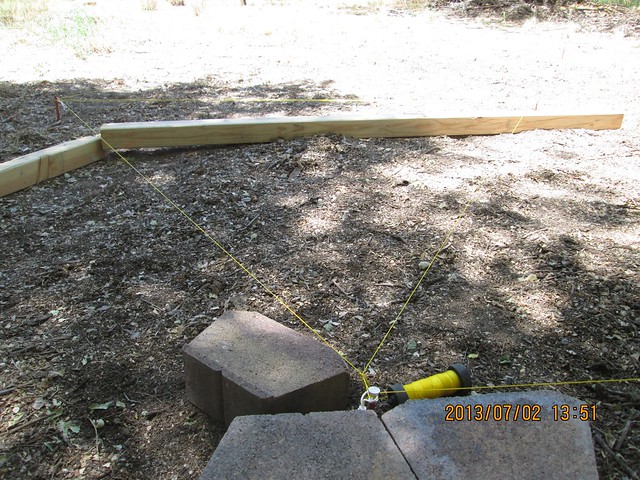 It has only been the past couple years that we’ve reliably attracted people with the capacity to do this kind of site-prep, and was one of many motivators for Alan taking a Permaculture Design Course in 2012: to keep up with the extremely talented crews which we’re delighted to host.

cutting pieces for the roof. 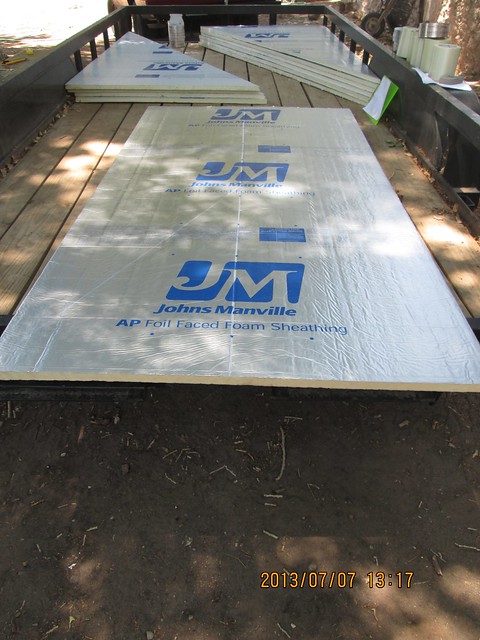 once the pieces are cut, the edges are taped with a durable woven tape to prevent deterioration of the edge. This tape is very strong, but not particularly sun-proof, a requirement in the high desert, where we get 360 days of sunshine a year — more, in recent years, with the unreliability of our summer monsoons. We added a layer of aluminum tape over the woven tape to protect its surface from local weather conditions. 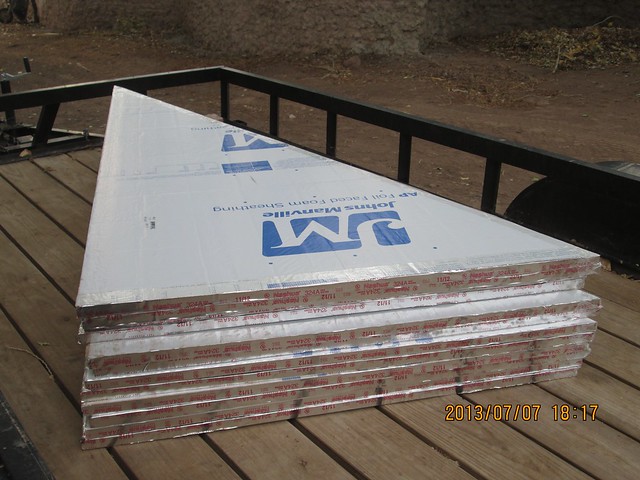 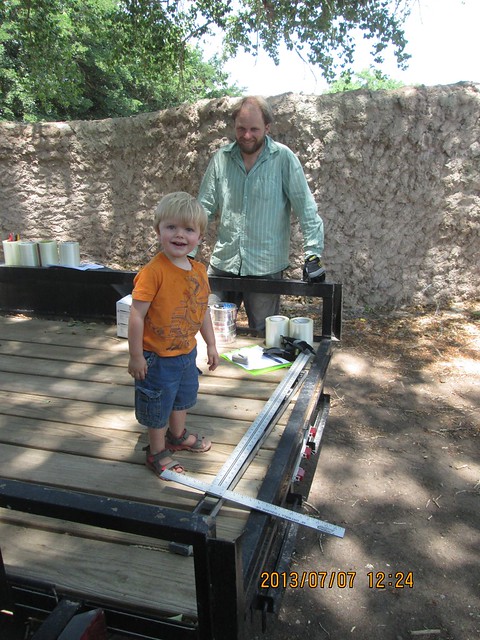 over the course of the last year, it has become clear that the silver insulation panels of Hex One are visible from space from at least a quarter-mile away. they don’t integrate visually with either the farm or the neighborhood. so i decided to paint the next one before we got it set up. at some point, we’ll paint the second one as well, when we can figure out how to get at the roof without taking the whole thing down. meanwhile, after some materials tests to see what would withstand the weather, we decided to go with exterior spraypaint, and i spent some afternoons painting trees and sky on the panels for Hex Two. the sky came out a lot brighter than the trees — i rather regret getting talked into turning it into an art opportunity at all, and instead wish i’d gone with my original idea of just painting the whole thing camo green. which is probably what i will do with Hex One. meanwhile, at least it blends into the environment considerably better. 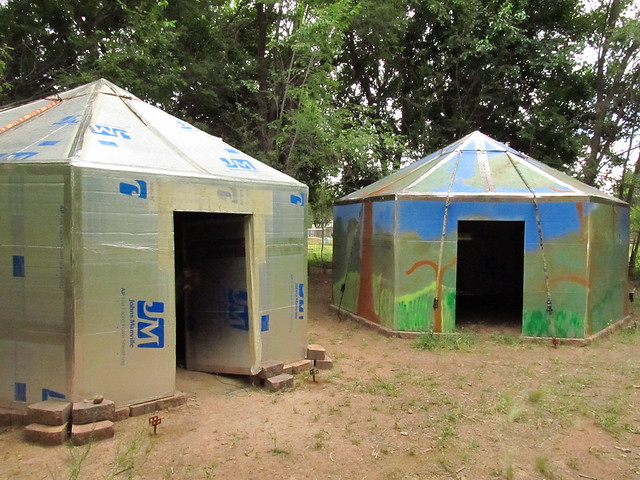 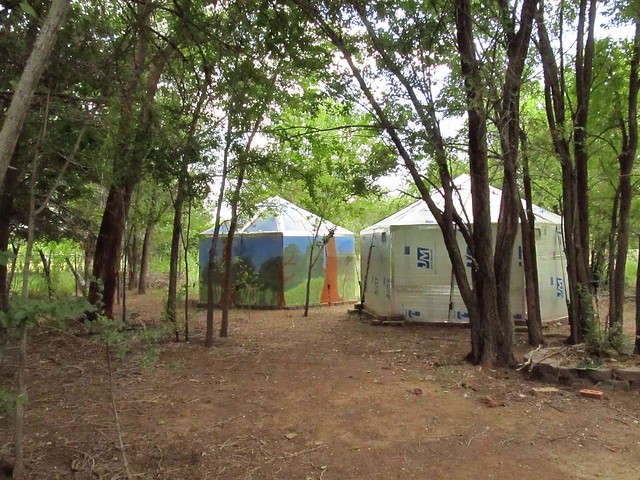 inside Hex One, various interns who have stayed there over the last year have built or found an assortment of furniture to make the space more homelike, including a pallet bed platform, a set of wire shelves, and a bench. last fall, Marisa even built a cute funky clothes rack from sticks pulled from the stickpile. 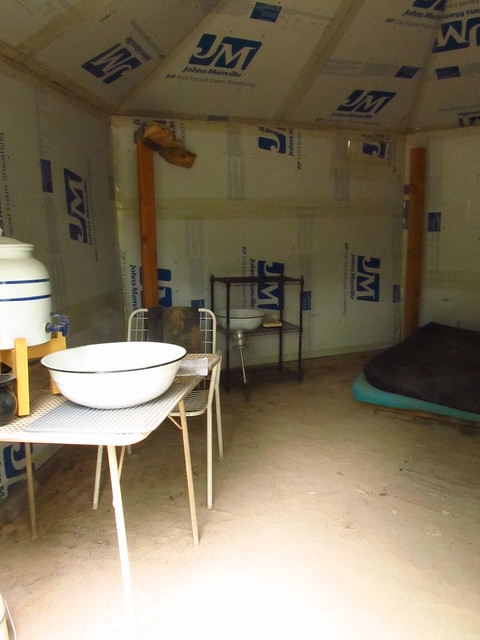